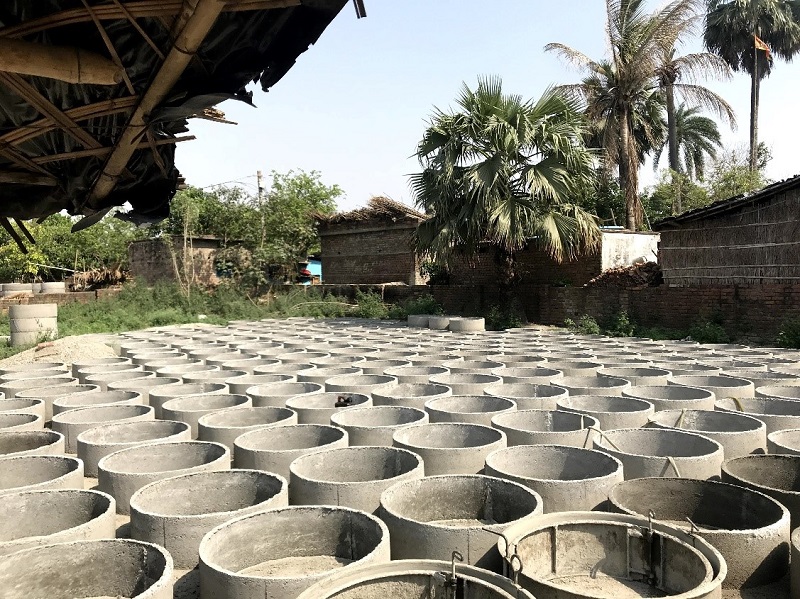 Shukla Shauchalay is located in a bustling market in Samastipur in Bihar, India. The entrepreneur first got involved in the sanitation business a decade ago as a sub-contractor manufacturing cement pit rings for a local NGO’s sanitation program. In 2014, he decided to open his own business to sell cement pit rings and covers for constructing toilets.

Shukla’s sanitation enterprise grew rapidly against the backdrop of the government’s Swacch Bharat Abhiyan (SBA) demand generation campaign. Many entrepreneurs entered the market to capitalize on the significant unmet demand fueled by the government’s campaign. Despite intense competition, Shukla commanded a price premium over other local suppliers. He built a reputation for selling high-quality products and customers, and was often recommended by neighbors and friends. The fact that he was a member of the panchayat[1] (local government) leadership committee may have bolstered the community’s trust in him and the assurance he offered.

As the business gained traction, Shukla (like many of his competitors) took working capital loans from a microfinance institution (MFI) in 2016 to widen his range of sanitation-related products, such as slabs and toilet pans, and boosted his profits. By 2018, he was selling over 300 toilets annually and was optimistic about the future.

About 70 km south, the story of Neeraj Enterprises in Begusarai stands in stark contrast. Neeraj also benefitted from the government’s SBA campaign, selling 500 toilets in 2018, but he is skeptical about the viability[2] of his enterprise. He also faced intense competition but was forced to lower prices to maintain sales. His profit margins are razor-thin, which has significantly impacted the income he takes home.

Both enterprises fulfill a vital function in the market—they ensure that households have access to a consistent and competitive supply of sanitation products and can exercise choice. Market forces dictate that some enterprises (like Shukla) thrive, and others (like Neeraj) may not. Still, a robust and competitive supply of toilets at an aggregate level benefits customers’ accessibility, choices, and affordability.

Implementers (government or nonprofits) of market-based sanitation (MBS) interventions have a vested interest in creating a competitive supply of toilets. To do so requires them to improve the viability (to the degree possible) of sanitation enterprises in the market. Implementers, however, often lack an understanding of enterprise viability. They typically track only sales volumes of enterprises, which gives a partial picture. For example, an implementer may perceive that Neeraj’s enterprise, which has higher sales, generates higher profits than Shukla (even though the opposite is true). Worse, an implementer might underestimate the risk of Neeraj exiting the market to pursue other, more viable opportunities.

A comparative analysis revealed that sanitation enterprises can follow several strategies to achieve viability, and sales volumes alone do not determine viability. For example, enterprises like Shukla are viable because they not only have high sales volumes but also command a price premium in their market (increasing their profit margin per customer). Further, they upsell additional products and grow their revenue and profit per customer. In contrast, enterprises like Neeraj are less viable despite large sales volumes, as they have high costs and competitive price pressures, which shrinks their profit margin.

Our analysis led to a second key question for implementers: What can they do to improve the viability and sustainability[3] of enterprises?

As a first step, implementers should gather financial data beyond sales volumes to prepare financial statements of enterprises. Financial statements provide a foundation to understand the performance and health of enterprises, diagnose issues, and help identify potential paths for improving their profits (and hence viability). These concepts are not new and are commonplace in commercial settings. Applying the same approach to sanitation enterprises will generate a wealth of insights on their performance and the underlying factors, which can be leveraged to improve their viability.

The second step is to identify and recommend strategies to improve viability that suit the enterprise’s capabilities and operating context. These strategies can be understood by analyzing relatively more viable enterprises that operate in similar contexts. For example, some enterprises in Begusarai that, like Neeraj, faced competitive price pressures, adopted different tactics to maintain their price levels. Some enterprises over-engineered their products to signal quality and durability, while others allowed customers to pay in installments or helped them apply for the government subsidy. Some customers valued these factors and were willing to pay these enterprises more than the lower price charged by a competitor down the street. Other enterprises chose to operate on a smaller scale because they were willing to let customers go instead of discounting and hurting their pricing (and margin). A few reduced their costs by manufacturing products themselves instead of hiring paid labor, which kept their margins high. Implementers can advise and guide enterprises like Neeraj to adopt strategies that are compatible with their operating context, capabilities, and, most importantly, the motivation to perform.

Not all enterprises need help. Some may already be viable, thus demonstrating the entrepreneurs’ business capabilities. But there will also be enterprises that do not have a clear path to viability because of unfavorable operating contexts or the entrepreneur’s capabilities. Some entrepreneurs may simply not have the motivation to improve or grow their sanitation enterprise and, instead, may pursue other opportunities. Implementers should concentrate their resources on enterprises that demonstrate both the potential and willingness to enhance viability using the approaches described above. Such approaches can have a long-term, transformational impact to create a competitive, thriving market beyond the life of the intervention.

FSG has authored a guidance report for practitioners on creating viable and sustainable sanitation enterprises. The report is supplemented by three case studies that detail our research on enterprise viability in Cambodia, India, and Nigeria. The research was funded by USAID and published by the Water, Sanitation, and Hygiene Partnerships and Learning for Sustainability (WASHPaLS) project.

[1] Panchayat is the lowest unit of local governance in villages in India. It is a local government elected by voters of their respective jurisdiction; Definition retrieved from Ministry of Panchayati Raj, Government of India

[2] Viability is a subjective measure, evaluating profit relative to a variety of explicit or implicit factors considered by an entrepreneur (e.g., minimum income expected, income from other non-sanitation specific enterprises, time and effort, or financial investment and risk).

[3] Sustainability is the likelihood that an enterprise remains viable over an extended period of time (i.e., multiple years) and continues operations without external, non-market-based support.