Gender can play a critical role in determining who has access to sanitation products and services and when. Yet the design of sanitation systems, products, and services is often approached without regard to gender or related social norms.

As we have explored the role of gender in sanitation in our consulting work, we found notable gaps in the field’s awareness and consideration of gender inequities across the sanitation value chain. Emerging evidence is showing not only that these inequities exist, but that they lead to poorer health and wellness outcomes for women and girls.

Identifying where inequities exist requires understanding the experiences, behaviors, and outcomes for both men and women. This process also helps determine how inequities in power perpetuate poor outcomes at the household, community, and sector levels.

Here, we share examples of inequities in access to and use of improved sanitation between men and women along the sanitation value chain.

These examples are drawn from FSG’s experiences working with clients that seek to improve sanitation conditions globally, including a recent study on scaling market-based sanitation conducted for USAID as part of the WASHPaLS consortium and an evidence review and set of case studies conducted for the Water, Sanitation, and Hygiene team at the Bill & Melinda Gates Foundation. We believe that adopting a gender lens when designing sanitation products, policies, and systems can help create better outcomes for individuals and communities.

Exploring inequities along the value chain: the user experience 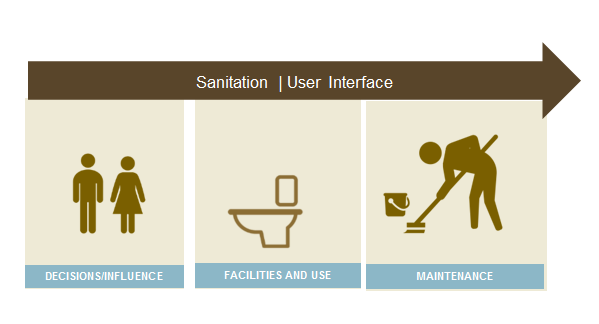 In many countries, men are the primary decision-makers in the household and have greater control over household financial decisions. When this power dynamic exists, qualitative data has shown that women are less likely to talk with their husbands about the family’s sanitation needs, and their needs are less likely to be considered in the purchase or placement of sanitation solutions.

Studies show that women experience humiliation, stress, and fear of gender-based violence (GBV) when defecating outside, especially when they are forced to walk long distances to the facilities. Therefore, many favor in-home facilities to promote privacy and safety for them and their children. Sanivation, a social enterprise based in Kenya that installs and services container-based toilets in the homes of the urban poor, found this misalignment in needs and decision-making power. Their consumer research revealed that some men canceled or refused to sign up for the service despite their family member’s needs.

Interventions that successfully provide sanitation access to both men and women have involved female sales agents and service managers as one way to increase communication lines with women in the households.

At the community level, interventions have included gender-specific focus groups for community-demand activation, and offer improved financing options for women and groups with limited access to credit.

Improved sanitation design solutions often fail to consider the needs of women and other groups like children, the elderly, and people with disabilities. Toilet design tends to consider the needs of gender-neutral users, overlooking the specific needs of women (e.g., menstruation) and other groups (e.g., child safety), in part driven by the male-dominated nature of the industry.

In many areas of India and East Africa, where our research focused, social expectations about modesty mean that women should not be seen urinating, defecating, or washing in public. Further, placement of facilities is often far or in inconvenient locations for women. Multiple studies reported that women often walk long distances or wait until dark to defecate or urinate in privacy.

A government program in Rajasthan, India provided household latrines and placed them in courtyards without consulting with women in the household. After implementation, project managers learned that the courtyards were traditionally spaces reserved for men and guests, rather than women, so women did not use the facilities and still went outdoors.

Segmenting customers can help practitioners understand the diverse needs of its users. Using sex-disaggregated data can help identify differences in use patterns and explore the drivers beyond these variations in product use. Currently, most practitioners rely on household-level data, which shields differences in use patterns among different members within the household. 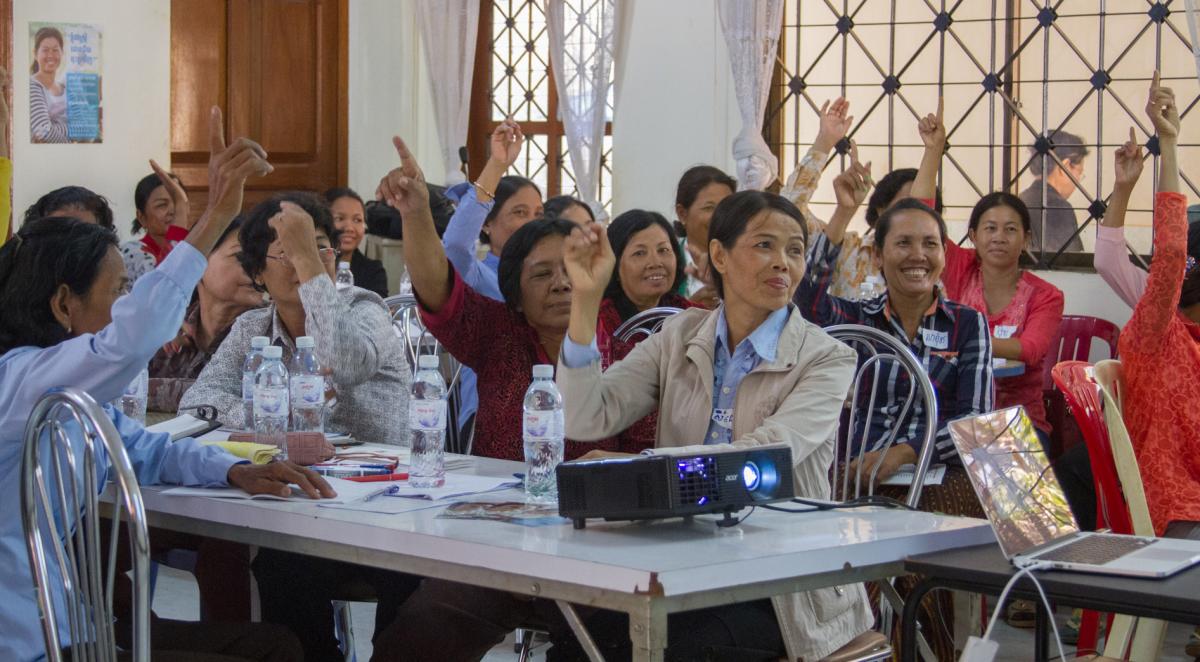 A group of women participate in a pilot workshop in Kampong Cham province, Cambodia. The pilot phase helped set the structure for the wider WEwork Collective that launched less than one year later. May 2015. Photo: © WaterShed

It is important to proactively involve women—or, at the very least, include their voices—when designing solutions. Qualitative research and human-centered design tools can help elicit greater participation and inputs from women and other underserved groups, bringing in a more inclusive perspective to toilet design.

Our interviews with NGOs and governments providing sanitation services have shown that women often take on a disproportionate amount of the burden associated with maintaining toilet facilities in the household, at schools, and in communities. Cultural norms in many parts of the world also result in women using toilets intermittently, as they often feel embarrassed about exposing other household members to evidence of their menstruation.

Sanivation, mentioned above, services toilets twice a week and found that usage went down among women during menstruation, suggesting they did not use the in-home toilets during this time. Challenges around menstruation are exacerbated by the lack of disposal options for menstrual products. These products end up either clogging toilets or being disposed of outdoors.

Thinking of designs and maintenance techniques that reduce time burden placed on women—such as toilets that require less regular emptying or that contain evidence of menstruation—can be a gender-sensitive approach to increasing the uptake of improved sanitation.

Gender inequities also affect sanitation outcomes on the supply side. WaterSHED’s intervention in Cambodia, which sells affordable toilets at a low-price point to consumers in rural areas, aimed to engage women entrepreneurs in its salesforce. WaterSHED staff found that female sanitation entrepreneurs under-performed compared to their male counterparts, and surveys showed this was partly due to a lack of strong social and professional networks. Female sales agents also faced time constraints and mobility risks that prevented them from effectively engaging with customers and closing sales at the same rates as their male colleagues.

Although the majority of programs target men for training programs and entrepreneur credit schemes, tackling supply-side barriers could be an effective way to improve sanitation outcomes while furthering women’s empowerment and economic success.

Beyond considering biological differences, addressing social norms that hinder progress on gender equity can be a critical vehicle to driving positive social outcomes for women and their families. Including a female perspective in sanitation interventions can both improve gender equity and increase uptake of improved sanitation for women and men. Further, providing gender sensitivity training to men and women can support norm change at both the household and community levels.