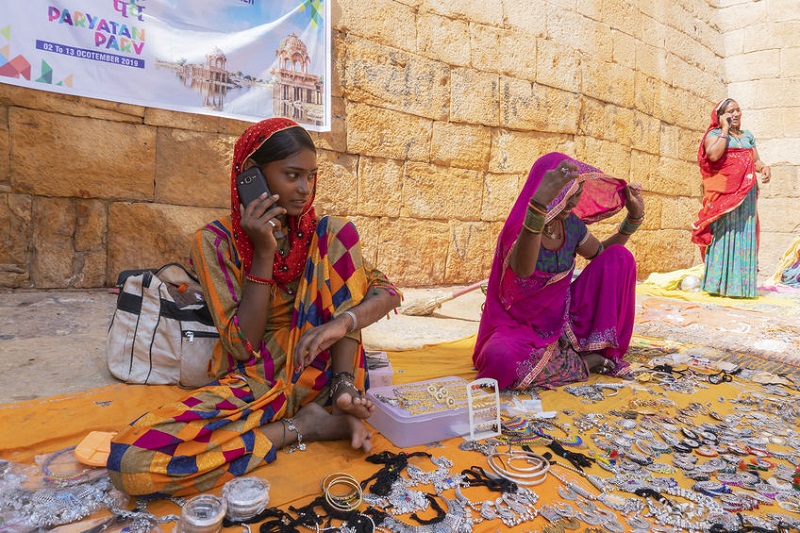 The sharp rise in access to smartphones in India over the past 5–6 years is now well known. Some studies suggest that smartphone penetration has grown by five times in this period, from 5% to ~26%. The COVID-19 situation is likely to further accelerate adoption, given the increased need to connect via virtual mediums. While there remains a gender gap in access to smartphones due to barriers such as inhibitory cultural norms and technical literacy, women from low-income households—particularly in urban areas—are slowly being digitally connected.

We at FSG were curious to understand how young mothers from low-income households were using smartphones, and what its implication might be for our programmatic work to improve learning in early education in urban India. We conducted a short internal study (before the COVID-19 pandemic), which involved qualitative interviews with 28 women from low-income households across Mumbai, and conversations with 10 industry experts. While the study was not exhaustive, we were intrigued by the stories and insights shared by consumers and experts and think they may help nonprofit and private sector organizations better reach and serve this segment (and more broadly low-income households).

Here are five insights from the study we would like you to consider:

There has been a sharp rise in video consumption on smartphones across segments due to a reduction in mobile data tariffs. Young mothers are also conforming to this trend. Most respondents we spoke with reported that they were actively using YouTube to watch entertainment and ‘do-it-yourself’ videos. For example, we conducted this study a few days after Diwali and heard stories of how YouTube helped households discover new rangoli designs. As a contrast, content with large volumes of text was seen as not interesting or entertaining.

Insight # 2: Use of voice command features is increasing

When we asked respondents how they discovered content on their phones, nearly everyone said through voice command, as it was simpler and more convenient than searching by typing on their phones. A young consumer, who works as a tailor, told us that she just has to say ‘naye salwar ke design’ (new designs in suits) and YouTube shows her a list of options. She then uses the related videos section to discover other videos. These features—which until recently were niche and occasionally plagued with operational issues—are gaining significant traction, particularly among lower-income communities.

Insight # 3: Smartphones are unlikely to replace televisions (at least that’s what consumers told us)

Despite an increase in video consumption on phones, most respondents mentioned that they continue to use a television set and will likely do so in the future. A television fulfills two needs that a smartphone cannot. First, it allows the family to watch content together, given the large screen size. Second, it makes it easier to consume content passively, along with performing other household and work responsibilities. As the young tailor told us, “I can stitch clothes for my customers or perform household chores while the television is playing in the background. I cannot do the same while watching videos on the smartphone.”

Similar to YouTube, WhatsApp was also widely popular, particularly its video calling feature. Most migrant families we spoke to reported using WhatsApp’s video calling feature extensively (sometimes up to 2–3 hours per day) to speak with friends and family from their native town or village. The feature enabled them to connect on levels that were not feasible earlier. For example, they could now show new purchases or see their relatives, along with being able to hear them. When we spoke to a woman who did not own an independent phone but used her husband’s phone, she told us “5–6 pm every day is reserved for video calling my mother in Andhra Pradesh.”

Insight #5: Are smartphones reducing the strength of ties within the local community?

Our final insight is framed as a question, given that it needs more research to confirm whether and how significant it might be. It is, however, an important hypothesis. During our interviews, most respondents reported that they rarely converse in person with their neighbors. The old narrative of how neighbors came together in-person to discuss popular TV shows or news did not seem to resonate. Could this be because individuals see less of a need to build and maintain connections with their immediate migrant neighbors, as they can now connect more easily with their families back home? And as a result, is the smartphone, while successful in connecting people far away, actually resulting in the community as a unit becoming weaker?

We believe the increased adoption of smartphones presents unique opportunities for practitioners in the development sector to increase their on-the-ground impact, particularly related to information dissemination in areas such as nutrition, health, family planning, and sanitation.

For example, could we use YouTube and other platforms to deliver important ‘infotainment’ content (material that is intended to both entertain and inform)? While some have already acted on this opportunity, more could consider this approach. One organization to look for inspiration in is Population Foundation of India, which developed ‘Mai Kuch Bhi Kar Sakti Hu,’ a soap opera to promote gender equality across rural India. The show’s storyline is centered on a young female doctor who returns from Mumbai to provide medical services in her native village. The show has reached millions of viewers and according to reports has triggered a positive change in attitudes and social norms around early marriage, family planning, and other gender issues.

Another opportunity is to leverage urban migrants to relay relevant information to friends and family back home, who can be harder to reach. For example, in our consumer research studies on family planning, we have noticed that there is often a rural-urban divide in awareness of contraceptive options, with rural men and women being less aware of many contraceptive methods. Could we address such a gap by intentionally having conversations with urban migrants on these topics, and then using them as a source to generate awareness on contraceptive methods in rural areas?

Smartphones could have significant implications on how societies—including low-income communities—function in the future. It is important for donors, impact enterprises, and nonprofit organizations to better understand what changes—and what does not—with this new digital age. Understanding these changes could help the sector design and implement innovative ways to amplify its impact, particularly in a new post-COVID-19 world.

Acknowledgment: We would like to thank Ashish Karamchandani, Jaagruti Didwania, Ishwar Gawande, and Mansha Kumar for their support and guidance on the study.