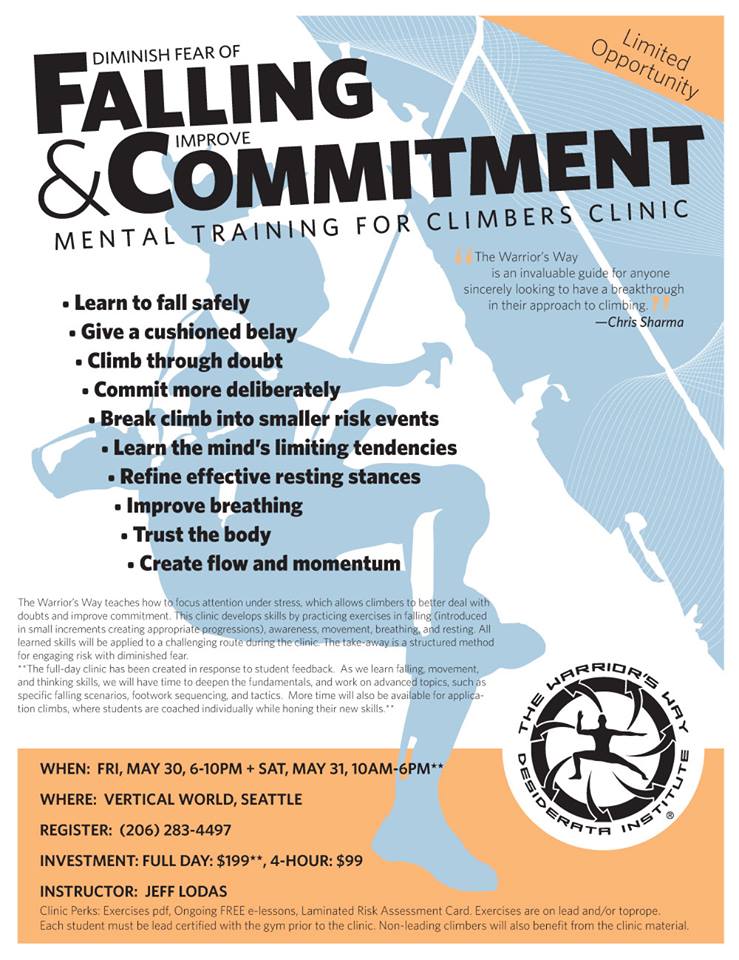 What does rock climbing have to do with social change?

On a Wednesday evening I found myself at a busy climbing gym watching people spider their way over tiny ledges, ropes snaking up and down the walls. I’d recently decided to get back into sport climbing after a long hiatus, and was waiting to start my introductory class so I could re-learn the basic—and critical—techniques to stay alive while clinging to the side of a wall. Glancing around, my eyes caught on a sign nearby advertising a clinic to learn the “Warrior’s Way: Diminish Fear of Falling and Improve Commitment.” “Was this a climbing clinic,” I wondered, “or a life skills course?” Among other benefits, the poster promised the following:

I enthusiastically asked my instructor Ben whether I could sign up for the Warrior training after completing his intro course. He quickly pointed out that before I could attend the clinic I would need to be lead certified, which wasn’t going to happen in just a couple of hours. Undeterred, and to the horror of my classmates, I asked whether he could incorporate some of the elements of the Warrior’s Way into our introductory session. Amused, he said, “Let’s see what we can do.”

About an hour later, we had reviewed safety basics and were practicing going up—and down. After I practiced falling, I wanted more; what would happen if I fell from a greater distance, closer to what they did in the Warriors course? Ben grinned widely and agreed to let me fall so long as he was the one catching me. Up I climbed, and then gripped the wall while he put slack into the line. With no sight line into how much slack he was giving, I had no idea how far I was about to fall. Ben announced he was ready; I held my breath. I reminded myself that we had triple checked my equipment, and silently told myself to trust the process. I took a deep breath, let go, and started falling.

Then the rope caught. I put my legs out in front of me as instructed, and came to a rest safely against the wall. In a state of exhilaration, I barely heard Ben proudly telling the group it was the “biggest fall he’d ever seen in an intro class.” I knew I’d be able to do it again. After the exercise, I asked whether I could also learn to catch someone much bigger than I am (a disparity in weight can mean the smaller partner gets lifted into the air when the bigger climber falls). Indeed, as my partner fell up I went – while safely maintaining my arm position and keeping him secure. We both came to a rest against the wall, then high-fived as we descended.

So what did I learn?

If you’re reading this blog, you’re interested in solving tough problems and making a difference. You may be deeply focused on getting things right. Perhaps give practicing failure a try. And if you want to climb, ping me!