As those who have tried to do it before know, convening members of the community around a common issue can be difficult. People often enter the conversation with valid—and ingrained—perspectives that are based on years of professional and lived experience. Sometimes bringing people together doesn’t work. But when you are able to successfully convene actors around a shared vision, there is a sense of hope that is contagious. Take Tammy Greer Brown, who wrote about a local steering committee meeting last year in Our Urban Town, a publication of Staten Island Urban Center:

“Earlier this week I attended a steering committee meeting with 30 organizations to discuss and map a collective early education plan for Staten Island. The issue of race and racial inequities was included in the conversation, a first for Staten Island. It was honest, emotional and intense. As we each told our story, we recognized we are more alike than we are different and want the same things, an exemplary education for our children. At the core of every sentence was a REAL commitment to move ALL children to not just meeting minimum state standards but exceeding them. For the first time since my children began their academic career, I see glimpses of a beautiful future for marginalized students of color on Staten Island where leaders who were formerly foes are now working diligently behind the scenes in unison.”

The Staten Island Foundation, which first began working with FSG on Tackling Youth Substance Abuse in 2011, partnered with FSG this year to create the Staten Island Alliance for North Shore Children and Families, an early childhood initiative to improve wellbeing for children from birth to 8 years old.

FSG supported The Staten Island Foundation in engaging a diverse group of cross-sector stakeholders to develop a common agenda for change, including a guiding vision, equity principles, and preliminary indicators and outcomes (e.g., family engagement, academic success, school readiness, and child health). The initiative’s steering committee worked to ensure that equity stood at the core of this initiative: members developed strategies to intentionally confront systemic barriers to opportunity. As a first step, this included disaggregating data by race, ethnicity, and geography, and inquiring as a group about the disparities that existed.

In addition to bringing insights from research, FSG helps create the right conditions for community actors to come together to see the whole system. This entails 3 elements: including those who aren’t typically invited to the table; facilitating discussions about systemic issues that hold problems in place; and having participants engage in deeper, more personal dialogue with one another.

The Staten Island Foundation played a critical role in creating the conditions for success in the initial meeting and the initiative at large. The contributions of the Foundation’s leaders ranged from sharing space at their offices as a neutral meeting place, to individually interviewing every person who was involved in the effort, to personally welcoming with appreciation every individual who attended the first meeting.

As part of the facilitation for this meeting, FSG used a common systems tool called an actor map. To begin, participants map the actors and organizations that influence the well-being of children. Then participants attempt to “see the system” through a racial equity lens and take note of the racial and ethnic makeup of end beneficiaries, senior leaders of different organizations that influence the well-being of children, and each subsystem of actors (e.g., health, education). Then, participants discussed the following questions as a group: How are race and power dynamics showing up in ways that may be impeding progress? What impact or influence does the racial makeup of these actors have on existing relationships, decision-making, or access to resources? 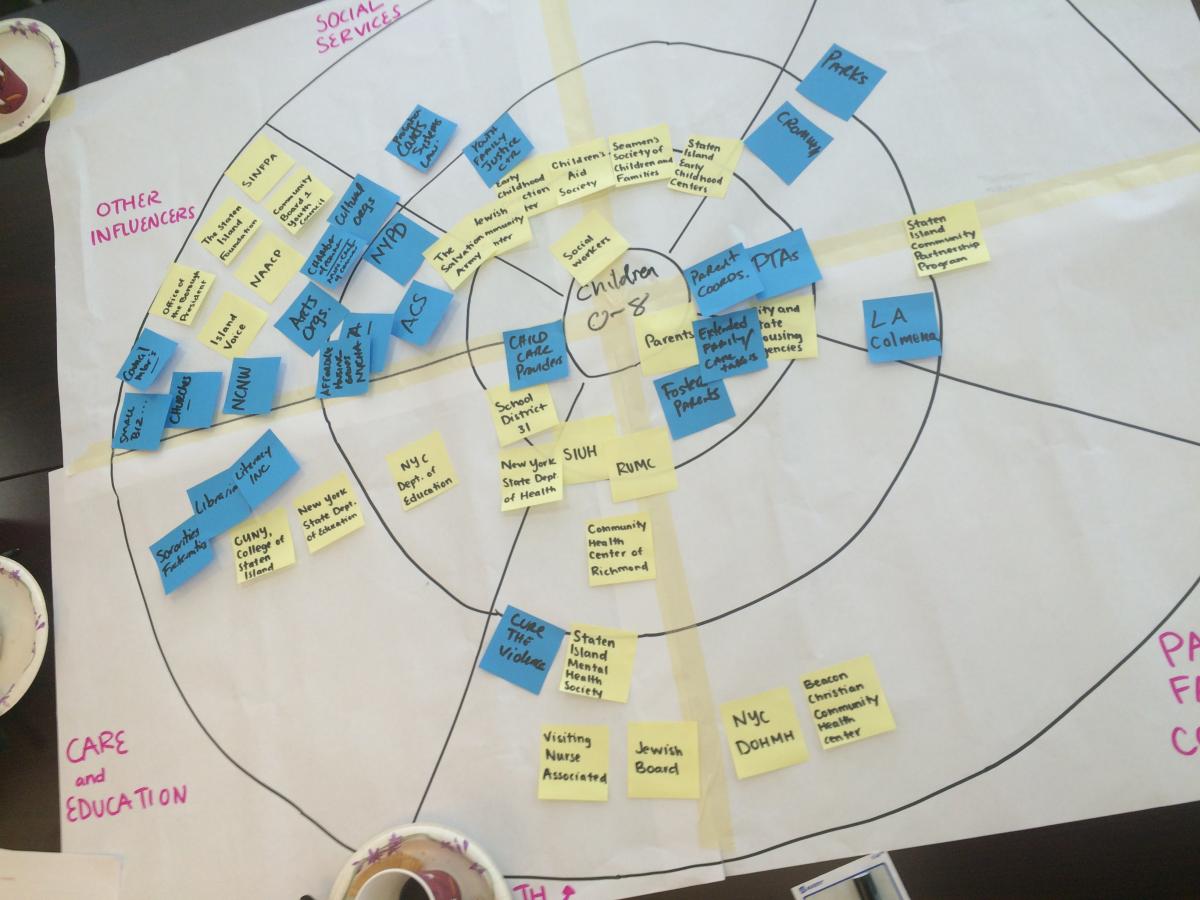 The actor mapping tool allows people to objectively observe power dynamics that may exist in the community. Instead of asking, “Are there disparities in the community or are there power dynamics at play?” to begin, participants start with a shared, objective understanding of the system, and then begin to unearth the implications related to that understanding. Participants are then able to discuss those implications together, building toward a shared understanding of the issues at play.

To facilitate conversations to bring people together around a shared vision, we recommend:

Today, the Staten Island Alliance for North Shore Children and Families continues its work to improve outcomes for children and families in the region. The Parent Empowerment and Action working group continues to do active outreach in the community. This includes recruiting community members to create and implement strategies and undergoing a study, commissioned by the Foundation, for which a primary input will be the voices and lived experience of community members. The values and work of the members trace back to the early foundational work that the group brought up in the context of the actor mapping exercise.

This fall, FSG and The Staten Island Foundation began working on a new community-wide initiative, focused on PK-12 education.