By 2050, over two-thirds of the world’s population will live in urban areas. However, water and sanitation services are often unable to keep pace with population growth in rapidly urbanizing cities, leading to deteriorating health conditions.1 Uganda is no exception. The country’s urban population is expected to nearly double between 2018 and 2050,2 putting significant strain on the country’s sanitation infrastructure. At present only 2% of the 1.8 million urban Ugandan households are connected to a sewer line,3 with the others relying on on-site sanitation facilities such as septic or pit toilets. Space constraints and the high cost of construction prevent households and institutions from building new toilets when their pit toilets fill up.

As a result, the provision of safe and affordable pit emptying services is a growing need in urban Uganda and a necessary component to achieving universal access to safely managed sanitation.4 The government of Uganda’s fecal sludge management (FSM) interventions focuses mainly on building treatment infrastructure and promoting the construction of emptiable toilets—the provision of pit emptying is considered to be the role of the private sector.

Cesspool and gulper emptiers don’t come into direct contact with fecal sludge. If they dispose of the emptied sludge safely into a treatment plant, their services are considered safe and hygienic. However, manual emptiers are directly exposed to fecal sludge, and so their service is considered unsafe and is illegal in Uganda.

Despite this, many urban households and institutions still opt for manual emptying, as cesspool truck entrepreneurs (CTEs) and gulper entrepreneurs (GPEs) are relatively few in number, are concentrated in Kampala, and are considered expensive.5 Kampala has an active market for safe FSM services, with 88 active cesspool trucks and 10 active gulper operators.6 However, most other urban or urbanizing areas in Uganda do not have a vibrant market for safe FSM services. They have very few CTEs and GPEs, and most of them run informal business with limited scale.

The Uganda Sanitation for Health Activity (USHA) is a project funded by the United States Agency for International Development (USAID) and works towards sustainable improvements in quality, access, and supply of water and sanitation services. FSG is partnering with USHA to enhance access to safely managed FSM services by improving the business models of FSMEs. We are approaching this by first understanding the barriers faced by FSMEs, and then identifying business model tweaks that can help overcome these barriers. We commenced our work in select urban areas within three USHA districts—Jinja, Kyotera, and Masaka. This article lays out our understanding of the barriers preventing FSMEs from building sustainable business models in these locations.

USHA’s FSM project team, which consists of USHA program staff, FSG staff, and FSM experts from Sanitation Solutions Group (SSG), conducted initial field research in June and November 2019. This involved interviewing ten FSMEs operating in the urban areas, to understand their business models and the challenges they face. From the interviews, we learned that nearly all FSMEs in these three districts:

The project team shortlisted seven FSMEs that showed the most interest in partnering with USHA. We then held a series of consultations with them to prepare detailed annual profit and loss (P&L) statements7 to understand their financial health and key challenges.

In this article, we discuss these key challenges based on a P&L analysis of two FSMEs (one CTE and one GPE). These challenges are indicative of issues faced by FSMEs in urban areas outside Kampala. All FSMEs shared data confidentially, so we have not named them and have excluded their actual financial figures. We have instead reported these figures as a percentage of revenue (see Figures 2 and 3).

Figure 2: Costs as a percentage of revenue for representative CTE 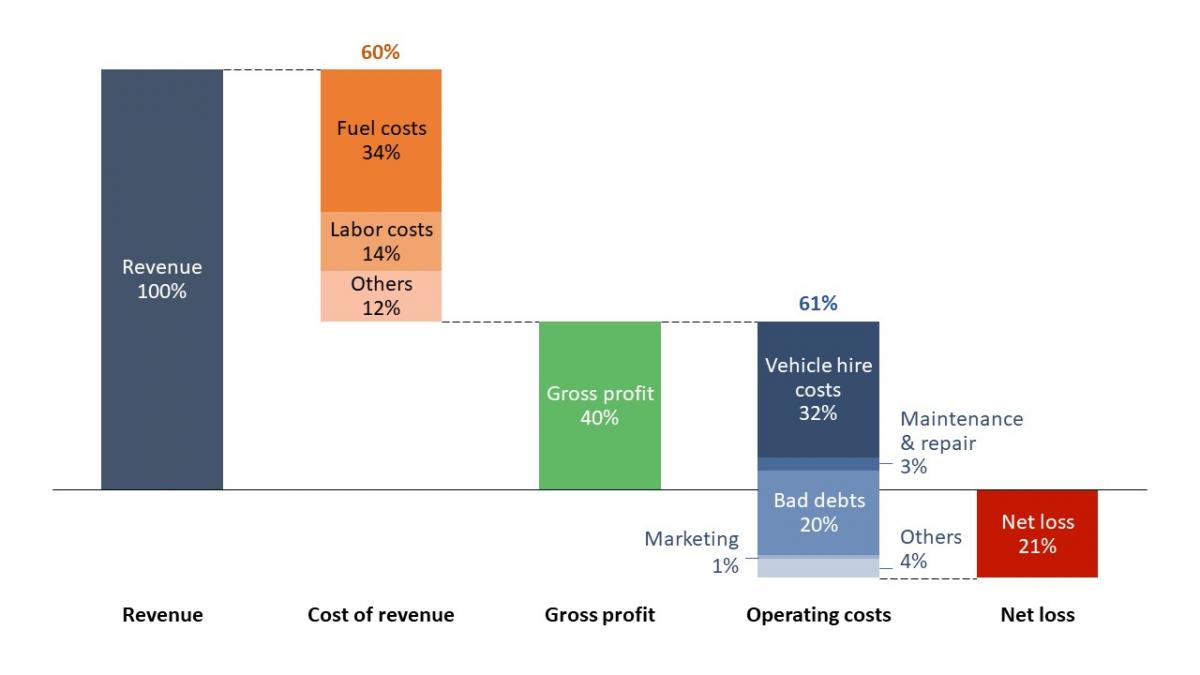 Figure 3: Costs as a percentage of revenue for representative GPE 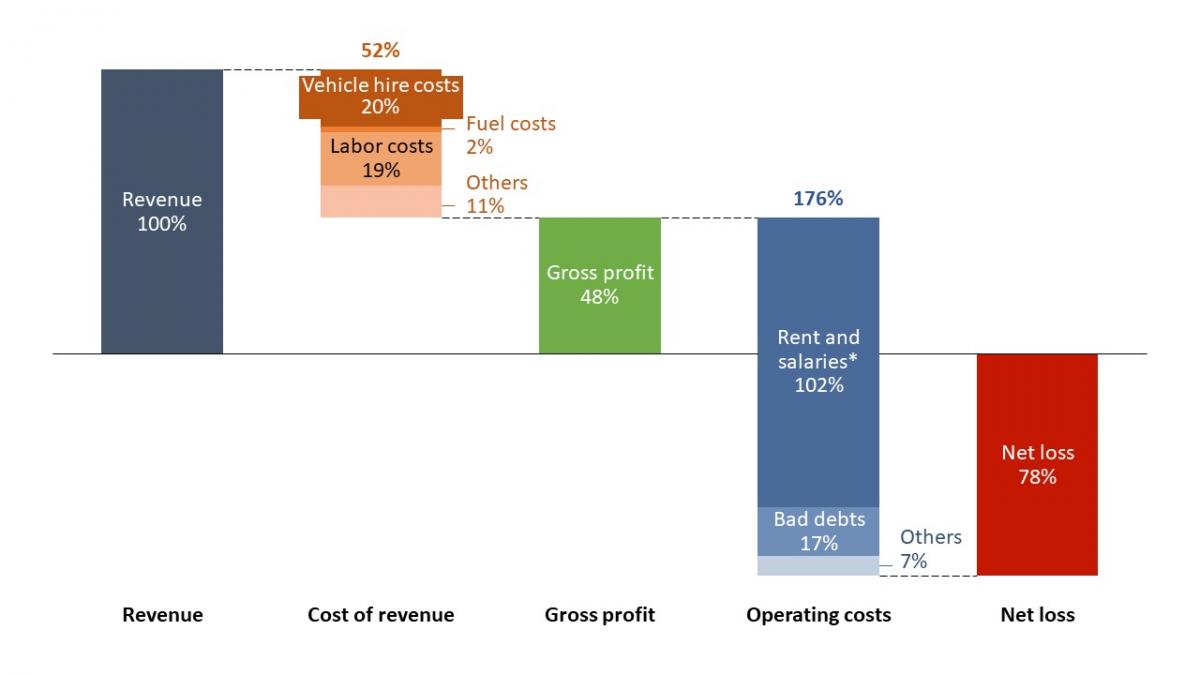 We found that while both FSMEs can cover the direct costs of providing an emptying service (i.e., labor, fuel, and disposal fees), they incur net losses. This is driven by three broad factors: low utilization, high transport costs, and high customer defaults.

The above challenges impact the scalability of the FSM market across the three layers of the WASHPaLS framework for Scaling Market Based-Sanitation16 (see Figure 4). The framework identifies barriers across three distinct domains: FSM market (comprised of customers, enterprises, and entrepreneurs); business environment (shaped by government policy or the availability of raw materials and financial services); and broader context (includes factors such as social norms, economic environment, and geographical conditions). Please note that Figure 4 is not meant to provide an exhaustive list of all barriers faced by FSMEs, or customers seeking FSM services, in urban Uganda. It is meant to summarize key barriers that affect an FSME’s financial health, based on the P&L analysis conducted by the project team.

Figure 4: Barriers to MBS and their effect on FSME P&Ls17 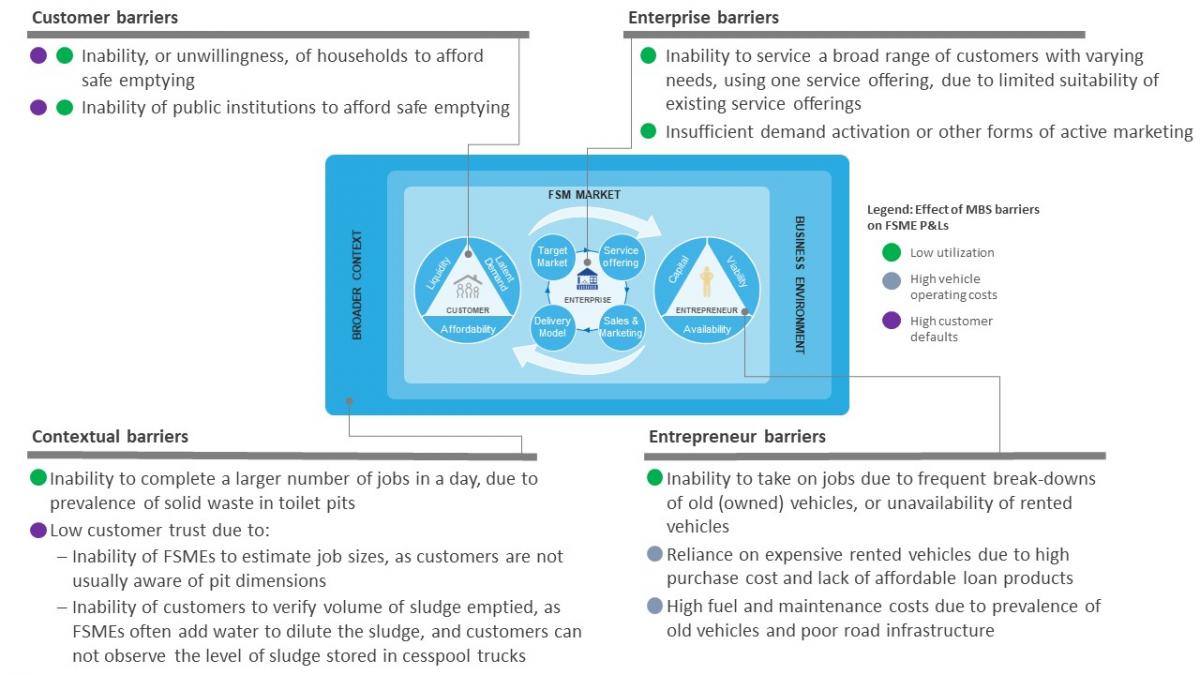 These challenges significantly hamper single-truck FSMEs from providing viable and sustainable services. FSG, working with the broader USHA team, has since developed a suite of interventions to address each of these challenges. USHA is currently supporting three FSMEs to pilot these interventions. We look forward to sharing learnings from these pilots in subsequent articles.

Acknowledgment: The P&Ls which form the basis for this article were developed by FSG with support (in the form of data, operational and strategic insights) from USHA program staff. The FSG team included Tarini Luniya, Rahul Singh, and Vignesh Shankar. The USHA program staff included Osbert Atwijukye, Robert Makune, Diana Keesiga, and Jonathan Annis.

[4] According to the WHO/ UNICEF Joint Monitoring Programme, safely managed sanitation refers to the “use of improved facilities which are not shared with other households and where excreta are safely disposed in situ or transported and treated off-site.”

[7] A profit and loss statement is a financial statement that summarizes the revenues earned and expenses incurred during a specified period, usually a fiscal quarter or year. The P&Ls we prepared are based on accrual accounting; i.e., revenue and expenditures are recorded in the period in which they are earned/ incurred, whether or not cash is received/ disbursed

[10] Faecal Sludge Management in Kampala, Uganda: Project Insights from GIZ Uganda, AFWA, 2019; average daily income was cited as USD 2, and has been converted to UGX using an exchange rate of USD 1 = UGX 3,750

[13] Mileage of a new vehicle depends on the size of the vehicle and the roads it plies on. A CTE operating a new 6,000-liter cesspool truck in a neighboring district to the representative CTE reported a mileage of 4km/ liter

[14] Taxes and duties on imported vehicles lead to a 90-105% increase in their final cost as compared to their CIF (cost, insurance, and freight) value. In one case, the project team estimates that, after taxes and duties, even a second-hand 4,000-liter cesspool truck would cost ~UGX 72 million

[15] Based on information provided by Finance Trust Bank and Opportunity Bank. The project team held detailed discussions with both banks to understand the terms against which the banks would be willing to extend vehicle loans to FSMEs