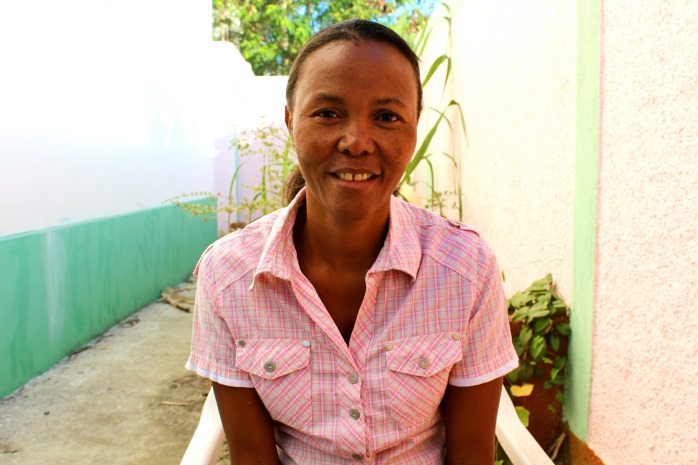 The cast at last week’s “No Ceilings: Not There Yet” event put on by the Clinton Foundation was impressive. Hillary Clinton, Chelsea Clinton, Melinda Gates, and America Ferrera all spoke eloquently, highlighting advances in gender equality and areas for continued improvement. But it was the speech of someone much less famous that caught my attention.

Genette Thelusmond spoke only a handful of words in English before launching into a moving story in her native Haitian Creole of her journey as a midwife in Haiti’s Central Plateau. I had lived for a couple of years in Haiti, and her voice immediately transported me back to the beautiful, harsh mountains of the Plateau and the hours I had spent talking with families who lived there, particularly mothers – mothers holding their babies; mothers hunched over a meal they were cooking; mothers selling rice and oil in the local market to support their families.

Genette is thinking about these mothers too. She explained that in a country with over 10 million people, there are only 200 obstetricians and 100 midwives to serve the entire population. The lack of qualified health professionals is one reason that Haiti’s maternal mortality rate remains one of the highest in the world, at around 350 maternal deaths per 100,000 live births. Thankfully, through the work of organizations such as Genette’s Midwives for Haiti, more midwives are being trained and more women will have the ability to access lifesaving services.

Yet the supply of excellent healthcare services is only half of the equation when it comes to improving health outcomes. Women need to be empowered to demand and access those services. At FSG, we've been working with the Gates Foundation to study women’s empowerment and social norms. Social norms are rules of behavior that individuals conform to because they believe that others in their relevant groups either also conform to them or believe they ought to conform to them (Bicchieri, 2010).

It turns out that social norms often supersede individual beliefs and attitudes about a given subject, which has real implications for those who wish to design and implement programs to improve health outcomes for women and girls. There is increasing evidence that discriminatory social norms can disempower girls and women from making decisions that would otherwise benefit them and constrain their choices and capabilities. Social norms can actually serve as barriers to accessing health services that girls and women know exist. Take just one example from Ethiopia: despite the fact that nine out of 10 girls and women know about modern family planning methods, only 20% of women aged 15-49 and 5% of girls aged 15-19 are using contraception (DHS, 2011).

There is still much for the field to learn about how social norms constrain women’s agency, and how norms could be changed to lead to better health and development outcomes for women and their families. For example, how would one measure a change in social norms? How can efforts to change social norms be combined in with more traditional approaches to women’s empowerment, like self-help groups or village savings associations?

These questions are complex, which makes them challenging. But understanding how to increase the demand for services like the lifesaving maternal care Genette provides will lead to real impact on mothers across the world.

Finally, FSG would like to engage you on this issue. What are your thoughts on ways to influence social norms for women and girls in order to improve health outcomes? Which programs have been the most successful at changing discriminatory social norms impacting women and girls? How can we measure progress in this area?